Having kids gives you a whole new perspective on how God must view us as His children. I got a large dose of this one day when Kennedy was a little bit younger (she couldn’t really talk yet). I, like the amazing mom I am, decided to make Kennedy some delicious waffles. I put extra butter on them (bc I vicariously live through the food I allow my child to eat), and then doused them with syrup. I couldn’t wait to see her face as she tasted this ridiculously perfect breakfast. But, as most things in life, it didn’t turn out as planned.

I told Kennedy to sit down, set down the waffles in front of her, and looked at her with anticipation. She looked at it one time, and shook her head, “No.” Then, she proceeded to walk to the fridge, open the door, and pull out some tupperware with old steak in it. She became fixated with this tupperware and refused my delicious waffles. I said to her, “Kennedy, this is SO much better than what’s in that tupperware! I know you so well, and I know what’s best for you, and WAFFLES are what’s best for you. EAT. THE. WAFFLES.” But, not to my surprise, she refused again. It was in that moment that I realized, this must be how God looks at us as His children.

The grasping. We grasp on to things we think are better for us. We make plans and think we know the best plan for our lives, and think, if God would just work it out the way we plan, then everything would be great. We, like little children, grasp on to the tupperware full of old steak when there’s a steaming hot plate of buttery waffles waiting for us. We try and control or manipulate our situation in order to accomplish our own goals instead of surrendering it to our Heavenly Father who loves us and wants an abundant, beautiful, life for us. How many times in my life have I tried to grasp on to something I knew wasn’t good for me? I remember times when I tried to manipulate a job opportunity, a relationship, a move, and at the end of the day, they all failed because I never surrendered it all over to my good, good Father. He had a perfect plan for me, and I would have saved myself a lot of pain if I’d only trusted Him with my life.

Trust. Really, what it all comes down is, Trust. If we truly believe that He is a good Father, and His will is always better than anything we could ever plan, then why is it so hard to let go and let God? It’s like the story of the fake pearls that I love to tell. A father gave his daughter a strand of fake pearls. It was her most prized possession and she wore them everywhere. One day, he came to her and asked her if she loved him. She, of course, responded, “Yes, Daddy! You know I love you.” He said, “Do you love me and trust me enough to give me your pearls?” And she immediately replied, “Why would you ask that of me? You know how much I love them.” He told her okay, and kissed her goodnight. Later that night after she thought about how much she loved her daddy, she approached his room. She entered and handed him the pearls. She told her daddy that she loved him more than the pearls. He replied, “I’m so glad you said that, because I have something even better for you. He opened his drawer, pulled out a box and handed it to her. She opened it and saw a REAL strand of pearls. These pearls were more beautiful than she’d ever seen. The moral of the story is much like the old steak story. We grasp on to things we think are better, but God ALWAYS has a plan for His children, and His plans are ALWAYS better than our plans. He, like a good dad, is waiting for us to surrender those things, even if we have to do it everyday, and trust Him because He wants an abundant life for you here on earth too. He wants good things for you and me, and sometimes it’s just hard to see based on our circumstances. So, let’s stop settling for those fake pearls and old steak, and start trusting that God has some real bling for us if we’d only let go and led Him lead us.

The Waiting. Now, this concept sounds great and all, until the waiting starts. The waiting is ALWAYS the hardest and let’s face it, the waiting sucks. (Sorry mom, she hates that word). All throughout Scripture God asks us to wait, and I think it’s just so that we are dependent on Him to accomplish these things instead of in our own effort. 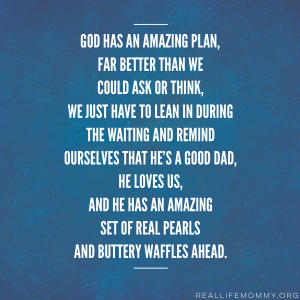 The waiting can cause us to freak out, try and control or manipulate again, or lose hope. But, God wants to remind us that He will redeem it, and even though His timing isn’t always our timing (it never is, is it?) and He has something so much better for us than we could ever ask or even imagine. So while the waiting is hard, keep reminding yourself of these things everyday, giving it back over to Him. I had to wait for a lot of good things in my life, for Daniel (after years of dating and everyone else getting engaged before me) and

for Daniel and I, waiting years for Kennedy was totally worth it in the end, we just couldn’t see it amidst our grasping, our waiting, and our loss. So, stay strong, friend, during the waiting. It’s only a matter of time before we’re waiting again for the next thing. God has an amazing plan, far better than we could ask or think, we just have to lean in during the waiting and remind ourselves that He’s a good Dad, He loves us, and He has an amazing set of real pearls and buttery waffles ahead.

Side note: Thanks John, for telling me I should turn this story into a blog 🙂 And to Nathalie, who was just there 😉 Love you guys.